I’ve always thought of myself as a pretty good youth sports assistant coach. Much like my professional life, I have never really strived to be the first in command. But I’ve always been more than willing to get involved however I can. I prefer the supporting role; in this case being a cheerleader on the sidelines for the kids and providing input for the head coach when needed.

I was an assistant coach in baseball for several years until my son fell rather deeply and quickly in love with soccer. It’s not a sport that was on my radar growing up, but as he started playing and following the sport I was quickly hooked. I helped coach in recreational soccer and futsal for a couple years before becoming an assistant for my son’s U10 club travel team for the 2016–17 season. 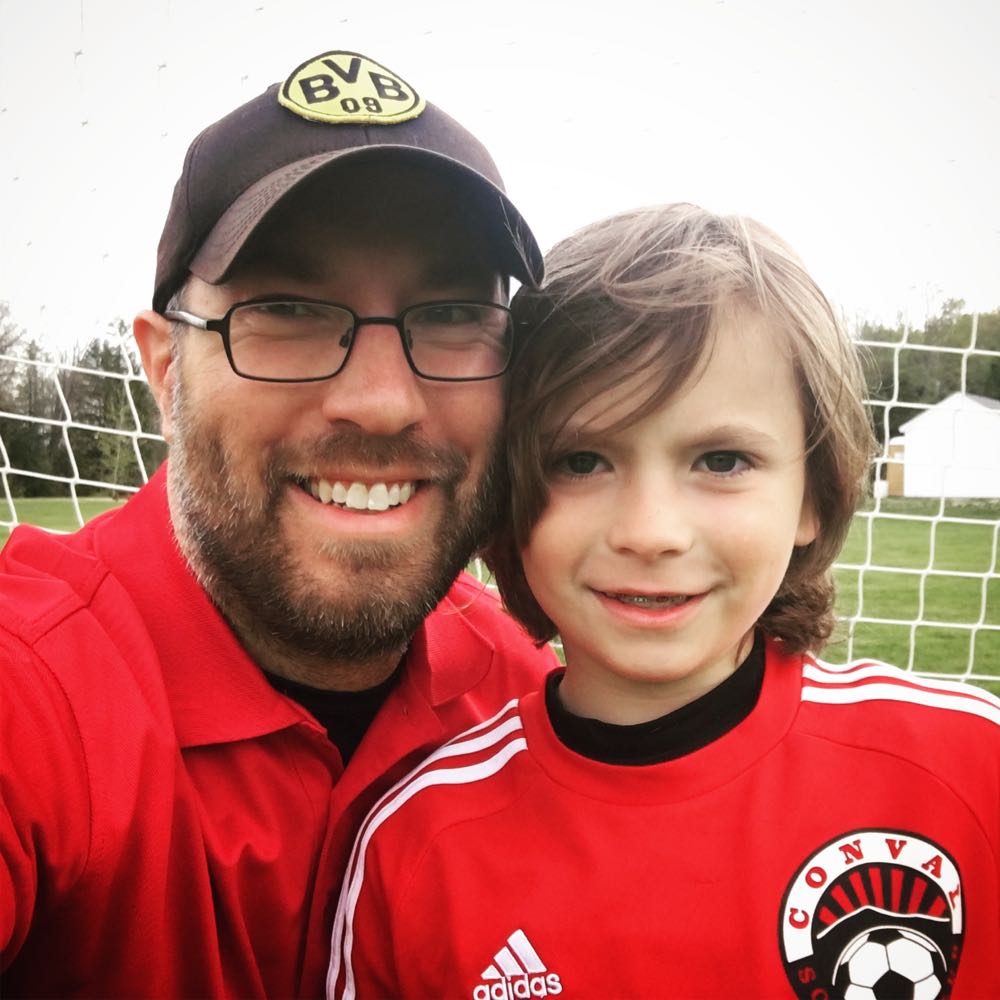 Me with my son Nolan.

This past season (Fall 2017), I—for a variety of reasons—suddenly found myself in a head coaching role for the club’s U12 Boys team. The team I took on was something of a hybrid squad. There were four players returning from the previous year’s U12 squad. I brought five talented U10 players with me (including my son) who would step up to U12. Then I supplemented the roster with five recruits who were new to club soccer — some I knew and some were completely unknown.

I’m a very detail-oriented and analytical person. A huge reason baseball was always such a draw to me was the numbers. I’ve been into baseball statistical analysis since I was ten years old. Even when coaching my son’s baseball teams, I kept detailed statistics. I knew that if I was going to run a soccer team, I couldn’t do it like my U10 head coach did. Nothing against him—our minds just work differently. He’s a very laid back person who likes to substitute on the fly based on how the game is going. That’s something I knew I couldn’t do for several reasons:

First came the math — how could I arrange a 14-player squad into a 60-minute match where each player could get about the same amount of time on the pitch? It turns out this is a much easier problem to solve for a 13-man squad (which is what we ended up having in our first game) so I’ll show that first. Here’s how the 13-man setup works:

This worked well in our first game. We played well and even picked up a 4–1 win.

In our second game, we had all 14 players. The math here was a bit more difficult. This is what the lineup ended up looking like:

We lost this game… by a lot. Pretty much everything went wrong, but one thing that stood out to me (and some of my players) was that we were substituting far too often. 7 or 8 minute shifts were not long enough to get a feel for the game. Just when a player was starting to get comfortable, I as asking him to come out or move. Not good.

The next time we had all 14 players present for a match, I’d streamlined things quite a bit:

Rather than having a ton of seven minute shifts, I tried to string three shifts in a row (more like 22 minutes) as often as I could. Previously, each position had 4–7 shifts over the course of the game with an average of 5.6 shifts. Now, each position had just four shifts each. The players responded to this system much better. In fact, they won the rest of their regular season games.

Going back to my obsession with baseball stats, planning my shifts allowed me to carefully track where each player was playing, for how long, and how often. If I made my substitutions at a time other than what my match plan said (usually only a minute or two difference based on when the subs were actually called in), I would simply note that change. After each game, I’d log the minutes in a spreadsheet.

Here are my players’ minutes by position for the season:

As you can see, I tried to get players time in as many positions as possible. P11 and P12 actually saw time at every single position while P3, P8, and P13 saw action at all but one. P9 only saw action in defense, but that was because of preference. I had a team of 14 players where at least 11 believed they were attackers. If a kid is willing and able to play defense and never wants to play offense, I’m going to oblige.

When it was all said and done, there were quite a few benefits to this system.

Is this system for everyone? Maybe not. But it works for my risk-averse and analytical brain. I know I’ll continue to employ a variation of it in upcoming seasons.